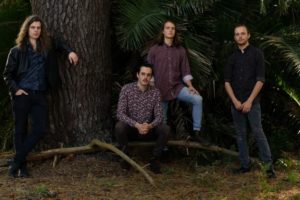 Sydney 4 piece, Grill, have summoned the Gods of Groove to manifest the funk within your soul. Their new single 'Dirty Two' is an independent release, launched on the 9th November at The Chippo Hotel, Chippendale, accompanied by a tour.

Created for the singular intention of getting down on the dance floor, Dirty Two is a tasteful blend of thunderous funk grooves of Funky Knuckles, with the gnarly rock guitars of King Crimson.

“I like to describe Dirty Two as a thick fluid of funk, that's snaking through a solid rock backbone.” Andres, Guitarist of Grill.

Grill have again chosen to address deeper concepts in their latest release with Dirty Two’s lyrics, “You’re made to be blind, by design" depicting a society absent from social and cultural awareness.
Grill previously released their debut album “ The Eternal Presence” in April which symbolised the relationship between Man and Earth