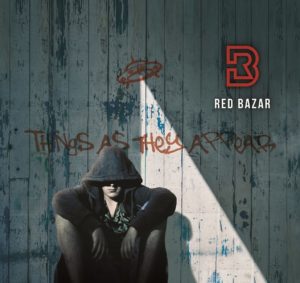 Red Bazar formed in 2007 as an instrumental trio featuring Andy Wilson on guitar, Paul Comerie on drums and Mick Wilson on bass and keyboards.

The line-up released two albums, ‘Connections’ and ‘Differential Being’, and a three track EP, ‘Beyond The Ice Storm’. The releases were well received by audiences and critics alike and the band developed a reputation for their live performances.

To expand on the sound, the band recruited keyboard player Gary Marsh and soon after teamed up with singer and multi instrumentalist Peter Jones.

This line up released the first Red Bazar vocal album, ‘Tales From The Bookcase’. The album was voted runner up in the Classic Rock Society album of the year awards 2016 and appeared in a number of top 10 album listings including magazines, radio stations and internet sites.

The band played a large number of gigs throughout 20 16 and 2017 and featured on a number of festivals and continued to develop their live performance and show.

Red Bazar is undertaking a series of live performance s in 2019 to promote their new album ‘Things As They Appear’ which will be released on 26th January 2019.