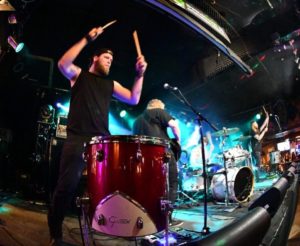 Kirra was founded in Oklahoma City by Daxton Page, Zach Stafford, Ryne McNeill, and Jesse Williamson in July 2013. Dax had recently left a local school for musicians and met Zach, and once they jammed together they put out a Craigslist ad for a singer & bassist. Ryne answered the ad and since he had just left a band with his friend Jesse, they decided to meet with Zach & Dax to see what would happen. During their first rehearsal they played a few cover songs, but by the end they had written their first song together, “Drown”. After playing some local shows in Oklahoma City trying to establish themselves, they decided to release some music for the first time in a 4-song demo in 2013. In the spring of 2014, Kirra released a 4-song EP entitled “Sounds from an Empty Room”. Having 8 songs recorded at various times and having new material, Kirra entered the studio to record their first full length LP, “Run Away”. The LP dropped in January of 2015 at a CD release show with Puddle of Mudd. The album featured hits like “Fly”, “Should’ve Been Gone”, and “Tappy Gilmore”. After partnering with Pavement Records in December of 2015, Kirra toured with bands like Saving Abel, Soil, Smile Empty Soul, The Veer Union, and Tantric through the remainder of 2016 and 2017. During May of 2017, Kirra went into the studio to re-record a track off their first LP, “Downfall”, and release it as a new single under Pavement Records. The track made it all the way #25 on the Billboard Mainstream Rock Indicator charts. Later that year Kirra announced that they had entered the studio to record new material for an upcoming EP entitled “Fight or Flight”. The first single from the EP, “My Disease”, made it all the way up to #30 on the same Billboard charts. In January of 2018, vocalist Jesse Williamson was killed in a car crash in Marion, Ohio. The band then went on to do a nationwide tour with 3x GRAMMY nominated band, Nothing More, with fill in vocalist, Vincent Grey to promote their EP “Fight or Flight”. In April of 2018, Gabriel Parson officially joined the band as their permanent vocalist.