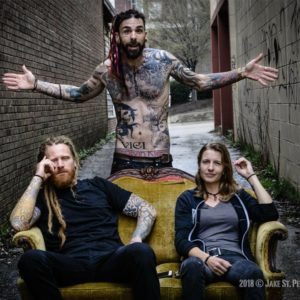 No one is actually named Bob

Super bob is seamlessly, effortlessly and organically rock, EDM, punk rock, and hip hop. We are as independent as an indie can be, and we have been making a living playing music for almost 7 full years.
Super bob, originally from the Washington D.C. area consists of three members that are now spread across the South Eastern part of the United States. Matt Santoro (St Pete, FL) is the vocalist/lead entertainer, PRS and GHS endorsed guitarist Adam Smith (Charleston, SC) is the man some simply call the guitar wizard, and SJC endorsed drummer Michelle Anthony (Savannah, GA) is unlike anything you’ve ever seen.
We’ve played over 1,500 shows, we won $25k in an X Games Battle of the Bands, we tour 200+ days a year and have for seven years. We’ve headlined tours, toured with nationals, we are road tested through and through. Super bob is a truly unique product on and off stage and our ability to tour and make music for a living speaks for itself.