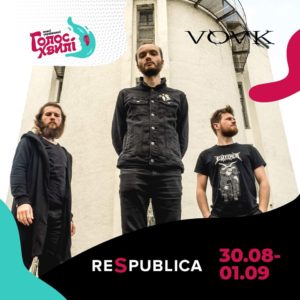 Ukrainian band VOVK releases the first album LAIR
The debut album by VOVK combines various musical genres and stylistically intertwines fast stoner rock with broken math rock rhythms submerging the listener in post-hardcore and progressive rock.
"The songs are born in the dens of our mind and played in dark rooms of Kyiv caves. Our music is our lair, " band members explain.
Each song reflects the life of the lyrical hero who is constantly searching for himself and his place in the world opposing his personality to society and other people's believes.
Illustrations for the album were made by the abstract artist Rene Bergen. "Through this visual design, we want to convey all the emotions and unpredictability of our songs. The combination of different and unlike things is what our music is based on," musicians say.
Igor Sydorenko (Stoned Jesus, Krobak, Voida), Igor Cherepanov (AGHIAZMA), and Katya Gapochka are the invited guests who took part in the recording.
The recording and editing were made under the guidance of Vadyk Lazariev at Lipky Zvukozapys (Kyiv). Mastering was performed by John Davis who is known for his collaboration with Led Zeppelin, Foals, Florence and The Machine, and others.
VOVK is a Ukrainian band from Kyiv that combines a variety of musical styles in its works mixing post-hardcore, stoner, and progressive rock.