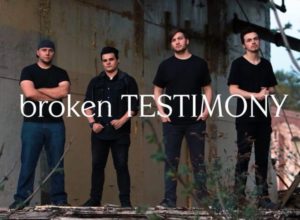 Forging an original sound while not directly copying one’s influences is never an easy feat, but it’s a skill upstate South Carolina’s Broken Testimony have mastered to a T.

Their recipe for supreme sonic success is as follows: Place equal parts Breaking Benjamin, Tool, Alice in Chains, and Chevelle into a rock-driven transmogrifier, press blend, and subsequently create new music that is notably hard-hitting, melodic, and catchy all at once.

“We’re trying to mold multiple different sounds and genres into our music,” explains BT’s lead vocalist and lead
guitarist Judge Page. “We pull together stuff from alternative indie rock to heavy metal to classic rock, and it all falls in together really well.”

Indeed, Broken Testimony prove they’re more than up to the task with the sound
of their kinetic debut album Holding on to Nothing , which celebrated its release
on June 22, 2018 via Thermal Entertainment.

From the unsettling ghostlike vibes
of “Unknown” to the moody slither of “Fade Away” to the ugly metallic screamo head of “Medusa” to the ultimate uplift and release of the album-capping “Vitality,” Broken Testimony have staked their claim for being at the forefront of a new generation that’s leading rock & roll’s ever-evolving melting pot.

“With the music on Nothing , we were able to take our listeners on the journey we wanted them to take,” believes BT drummer Bryce Chism. “They get to feel
certain ways with certain songs, where it doesn’t have to be just one thing. And
that’s cool, because we want people to feel we can go as soft as we want or as hard as we want, and still have them like whichever road we go down. And having those moody interludes between some of the songs gives listeners a break to all the chaos going on around them.

We put them on a rollercoaster of emotion, which is exactly how we wanted to set that table — and I think we did a phenomenal job of it.”