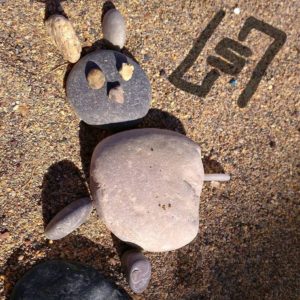 Grzegorz "sencha atta" Leczkowski - guitarist, once I co-founded the little-known group STOP (Anna Michalkiewicz/ Hubert Korczak/Dariusz Zdziebłowski). We played at music reviews of FIESTA BOREALIS - Przystanek Olecko, as well as in Warsaw clubs.
I also cooperated with Konrad Kucz, Concerts in the Park and Remont, at the POZA KONTROLĄ review.
after years of sleep I participated in Wojtek Szadkowski's project
Travellers - 'A Journey Into The Sun Within'.
I am currently involved in the LSA.
I act as a producer, sound engineer, as well as playing guitars, bass, sometimes pressing the black and white button....

Marek "Lunar Synth" Wyrwas
Multi-instrumentalist, self-taught on most instruments :). I play almost everything that falls into my hands, I released a solo album with electronic music "Future City". Apart from playing on various more or less known instruments, I'm also involved in 3D modeling.

Anna Klebus/Aulena/Siren
She gained her musical experience in acting and cabaret songs. She has a diploma in opera singing. As a folk singer she debuted in the film publication "Podlaska jesień". She collaborated with Fils de Estoiles - (she sang as a guest singer in French psybient albums "Out in Orbit" and "Le Voyage Introspectif"). Currently she cooperates with the ethnojazz band Sarakina Balkan Band - (she gives concerts, took part in the album Balkantron). She specializes in Balkan folklore - she won first place in the international competition "World, Art and Sea" in the category of folk solo in 2016.