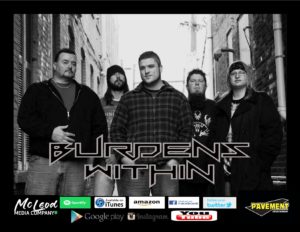 Burdens Within was formed in 2010 when friends Ryan J. Kline (Bass) and
(Guitarist) Mike Riley’s previous bands came to an end.

The duo ran into each
other and decided to get together to write some music. They wanted to
write songs with no barriers. Armed with one purpose: “We just wanted to
make kick ass rock music” states Ryan.

With its roots in the alternative grunge movement of the 90s and adding
elements of Classic Rock, Hard Rock, & Metal, Burdens Within covers all the
bases and has created its own unique sound.

After inking an Artist Partnership deal with pavement Records, the band
has released their debut self-titled album and video for their single "Dead
End Town".

With 2018 coming to an end , its been a busy year. The band has been getting air play on numerous
internet and FM stations, has been featured in many magazines , done many interviews, released a
lyric video for their track “The Great Deceiver”, and played numerous shows.

The band is now working
on music for a follow up up album and plan to hit 2019 even harder.

If you’re looking for a band with a great modern metal sound, look no further. Burdens Within are here
to save the day. With their debut release the band explodes onto the music scene with a thunderous
roar. With more than it’s share of great classic metal riffs fused with a nice modern sound, the band
makes a great statement with this release.

Opening with the song “Bruised” the band delivers a
knockout punch.  It’s a solid debut with great songs throughout. A new band with a fresh sound and heaviness to go around, Burdens Within prove they belong
with their debut release.

Get your copy anywhere that you buy music on January 26th!