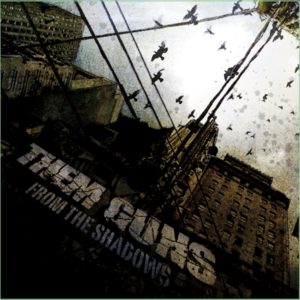 THEM GUNS SIGN WITH TLG / INGROOVES FOR RE-RELEASE OF "FROM THE SHADOWS" Quote from band - "We're excited for the opportunity to get our music to a larger audience through our partnership with TLG / Ingrooves and look forward to releasing new music with them soon" Los Angeles quartet Them Guns are really igniting a buzz thanks in large to their new single, “Fireworks,” a dark rocker alight with energy.“Fireworks” is taken from the band’s new full-length effort, From The Shadows, which hits the proverbial shelves on February 22nd via TLG and Ingrooves Them Guns hit the ground running in 2013, in sunny Santa Cruz, a place that’s as much a paradise as it is dark. Founded by principal songwriters Navarone Garibaldi (interestingly, the son of Priscilla Presley) and long-time friend Kyle Hamood, the two found their styles to mesh well and began regularly writing and recording. Things were rounded out by drummer Lorenzo Perez and bassist Chuck Holiday. With new music coming soon and extensive touring ahead, Them Guns will be lighting it up in your neighborhood soon.