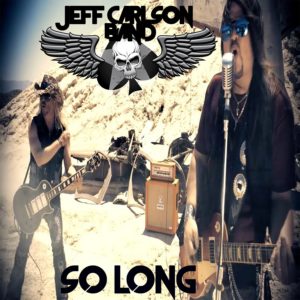 eff, Robbie Wolfe, and bassist Cory Kay have been playing together since 1998, under the band name of Liquid Skye. Since then, Jeff has secured a solo deal with Potomac records, with the addition of new drummer Mike Mitlying. Thus, The Jeff Carlson Band was born in 2018. Collectively, they have played with Bret Michaels, Slaughter, Lynch Mob, Y&T, Tesla, and Frank Hannon from Tesla. Now, in 2018, Jeff has released "Never Be Another You" on Potomac records. Now in 2019, Jeff has just released the much anticipated new single and video for"So Long." In May of 2019, they are playing new dates with Lita Ford, Bon-Jovi's Phil X and The Drills, Firehouse, and Jack Russell's Great White, while finishing up their long awaited release of their new five song E.P. with two new videos, along with signing with Al Gomes with Big Noise Now and Scott Thomas for their new P.R. reps! Stay tuned for latest news on show dates as well as album release dates!