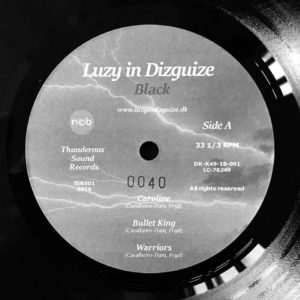 The danish metal pop band Luzy in Dizguize has just completed their first album. “Black” is out March 1st 2018.
The last journey is the best
Even though Jakob Cavalhiero-Dam and Peter Fryd have have known each other for almost 30 years they both admit the best journey has been the creation of “Black”. From melodic hard rock to metal pops where the band has found the distinct sound
International success
Caroline was digitally released in the autumn of 2016 and entered the Danish iTunes chart as number 34. The song got lots of international airplay especially in the U.S, but also in more exotic countries like Ecuador, Mauritius and Brazil.
Recorded in the basement
“Black” has been recorded in Peter Fryd’s basement bar in Denmark. No producers have been involved nor any fancy equipment. In fact, the album was made on an old 4-tracks recorder without any computer programs - completely retro, completely rock’n’roll.
“Black” is out on all major digital platforms and on vinyl LP in selected stores